Let’s Talk About FEAR (And how It Can Stop You)

This is something you probably don’t think about often, but that’s exactly why so many people fall for it. Fear is not something we like to admit that we have. In today’s macho society, you don’t like to let other people know that you’re afraid of something for fear of having that used against you.

Of course, we know what President FDR have to say about fear:

“The ONLY thing we have to fear is fear itself!”

I saw a movie this weekend that many of you probably have seen already, called After Earth. This movie stars Will Smith and his son, Jaden Smith in a sci-fi adventure to overcoming fear. While I’m sure this doesn’t rank to many as the summer’s blockbuster hit (especially when compared to the likes of Man of Steel, Iron Man 3, Wolverine, Star Trek Into Darkness and others), the meaning behind the story is what blew my mind! 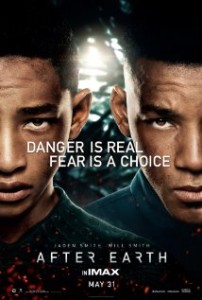 Well, according to Will Smith, “Fear is NOT real… It is a CHOICE.”

Why is this such a revelation?

Well, because it rings and brings light in world that is darkened by a paranoid society… LOOK at us! We’re living in a generation of bottomless debt and wars against terror and weapons of mass destruction… There plenty to be “afraid” about… but none that requires it.

Fear is a choice.

Why Do I Become Afraid?

It’s an immediate response to the uncertain. Anything new warrants that initial gut reaction.

You know I’m a rapper, right? Well, I’ve performed all over and several times a year, every year since 2004. You would think I’d be devoid of all forms of stage freight, yet, to this day when I get on the stage, guess what’s the first emotion I feel just before grabbing the microphone?

Yep, you guessed it – FEAR.

Thing about it is, fear isn’t the only feeling that pops in my head when I’m about to take the stage… but fear is the one I pay attention most to. THAT is what we need to analyze… WHY is fear the first feeling we pay attention to? It’s a negative feeling, why on earth would we look at that emotion over other emotions such as excitement, jubilation and anticipation?

We become afraid because the thought of failure brings up uncertainty and when we lose control over our lives – that’s when things start to fall about.

How Can I Overcome Fear?

Become an atheist. No, I don’t mean denounce God and all sentient beings in the world… Coz true atheists feel fear as well. No, I mean become an atheist of FEAR.

Don’t believe in it.

Reject the very concept of fear. Other people can feel this imaginary emotion, but you don’t have to. For you, it doesn’t exist.

There was a moment in After Earth when Jaden Smith’s character heard the advice from his father to clear his mind and ground himself to recognize where he is. Will Smith’s character tells his son that fear doesn’t exist. Danger exists, but fear is a choice. Expel fear, and YOU-WILL-SUCCEED!

Obviously, you’re going to tell me, “easier said than done”, well of course it’s going to take a real effort to do this. However, you NEED to do this! Why not? Do you enjoy being afraid? Do you enjoy fearing success or having a GOOD change come into your life? Fear is a human emotion, but it’s not a necessary emotion.

Watch This Video And REMOVE Your Fear!

What Does Success Look Like? Smack That – Featuring My Little Sister